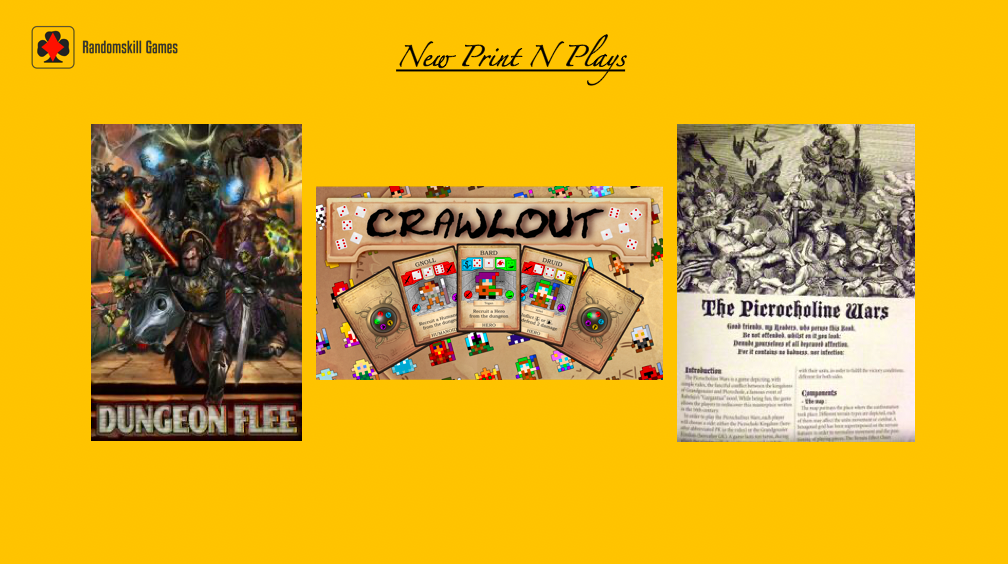 The dungeon deck consists of 104 cards representing six dungeon levels, monsters, treasures, traps, doors, empty corridors, dead ends and stairs up. While exploring a nearby dungeon, you found a horde of monsters planning something big for your nearby village. You were attacked and fell off a ledge in to the void. Left for dead by the monsters, you now have to make your way out of the dungeon and back to your village. You have no ideas where you are or how to get out but you have to escape and your are running out of time. Each corridor you take could lead you closer to the exit or directly into a dead end. Keep running and if you hit a dead end turn around and continue running. You can’t stop and you must escape. Each turn presents new dangers and possible treasures. If you can survive long enough to make it through four stairs up you escape the dungeon alive. Take too long or hit too many dead ends and you may never make it out alive.

Crawlout is a solo dungeon crawler card game, bringing some fresh meat
to the dedicated dungeon crawlers out there. Kill monsters, recruit
allies, gather treasure, and survive to tell the tale. Game mechanics
are easy to learn, stress-free, and never (too much) punitive, suitable
for both young and seasoned players. Every game will be different, cause
you start your adventure with 3 random Heroes from a pool of 25.
Moreover, many Heroes can recruit new allies, turning foes into party
members. The Warlock will bring demons in the fray, while the
Necromancer can command undeads to join, and so on. Etner the dungeon
and aim for the perfect score!

You play by rolling a small pool of six-sided dice, starting with 5d6.
Once rolled, dice are placed on the number-matching dice icons of your
party cards, activating an action (left and right icons) or the skill
(central one), described in the text. The fueled actions will beat the
dungeon cards defenses, shown as round icons. You won’t meet just
creatures; snag cards represent doors, traps and other unforeseen
events, while item cards are single use effects that will give you a
hand.

A game takes more or less half an hour, depending on your playstyle and experience with the game. You can decide to play with half deck for a quick run. The game is highly replayable, cause every run will be different, like in many roguelike games. 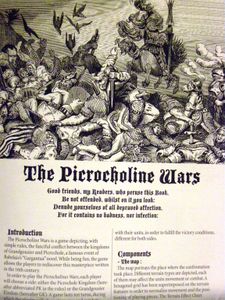 The story of the Picrocholine Wars is one of the most well-known passages of the novel Gargantua, written by François Rabelais in 1534. Using a brawl between shepherds and millers as a pretext, Picrochole, King of Lerne, declared war on Gargantua’s father, Grandgousier. A model of the enlightened monarch of the Renaissance, Grandgousier attempted to avert war by all means. But Picrochole, taking this as a sign of Grandgousier’s weakness, invaded his neighbor’s kingdom. Grandgousier calls upon his son, and Gargantua, at the head of an army of his loyal companions, inflicts a humiliating defeat on Picrochole, who flees on the back of a donkey.

The Picrocholine Wars simulates this celebrated episode of French literature through a fun and simple wargame. Players will find and discover in this game all of the events that gave the novel parodying the chivalric tomes of the era its charms: the giant Gargantua, of course, and his friends Gymnast and Frère Jean, but also the cheating Picrochole and his lieutenants.

Though it has its “rabelaisien” side, The Picrocholine Wars is a balanced game in which each camp has its own distinct strengths and during which players will have to adopt the role of both the attacker and the defender. The Picrocholine Wars combines gaming pleasure with culture and history, and is ideal for initiating new players into wargaming.