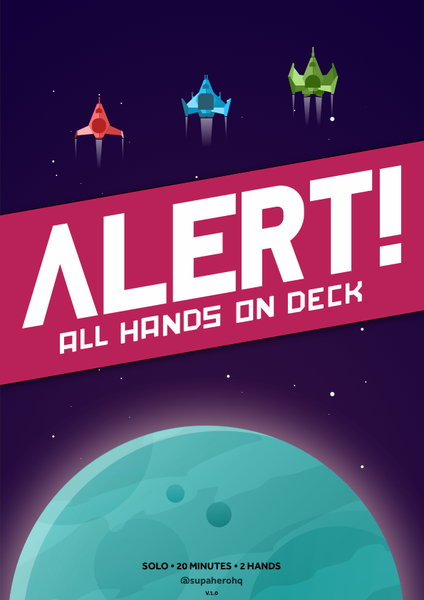 What is “Alert! All Hands On Deck”?

Alert! All Hands On Deck is a solo print and play (PNP) card game, played in hand, without a table.  The game is reminiscent of old school combat flight games that you can find in arcades back in the 1980s.  Using your fleet, you must defeat all incoming threat waves and save your planet from being destroyed by alien forces.

Alert! All Hands On Deck is played by maneuvering one of the three ships that are assigned to the player.  The number of actions that the ship can take per round is determined by the energy that the ship has in its battery at the beginning of the round.  Players can choose to either move or shoot and each of these actions will consume 1 energy.  There are 4 positions (lanes) that the ship can freely maneuver in.  The threats that are encountered in the lane can be destroyed by firing on them.  Points are calculated at the end of the game when all the threats are destroyed.  If all three ships in the fleet are destroyed, the player loses the game.

Why should you play “Alert! All Hands On Deck”?

What I like about this is that the entire game can be played in your hands.  Therefore, there is no need to even have a table for you to play this on your own.  The portability and the ability to play through the game in your hands make this a great travel companion!

This solitaire is played in a style that is reminiscent of the horizontal scrolling shooters that were once ubiquitous in arcades.  I, personally, have not come across a game that is played in this format so it definitely ranks quite high, for me, in terms ingenuity.

In terms of mechanics, the gameplay is quite a straight shooter (no pun intended).  The only down side of the game play is that the maneuvering of your fleet from left to right and vice versa requires some getting used to.  The decision-making aspect of this horizontal scroller really brings out the flavor of the game.  Similar to what you have experienced in horizontal scrolling shooters, the decision of when to activate a power-up is essential in the survival of your fleet.  Players need to decide whether to use a power-up now so that the enemies can be cleared faster and more points can be accumulated with the current multiplier or to save it so that you stand a better chance in defeating the final boss.  This makes the experience an exciting and interesting one when playing the game.

All in all, this provides great entertainment, with its sleek design and excellent portability, especially during your commutes.

“Alert! All Hands on Deck” is on a 33% discount from now till 31 July 20! https://randomskill.games/product/alert-all-hands-on-deck/

Link to the previous entry on “Print-and-Play Spotlight can be found here: https://randomskill.games/print-and-play-spotlight-crimson-company/