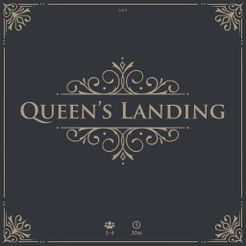 What is Queen’s Landing

Queen’s Landing is a roll-and-write with elements of area control and resource gathering infused into its gameplay.  You are the founder of a secret society and your objective is influence the Queen, the Bishop and the Knight to secure your secret position as the true shadow ruler.  The game is played over multiple rounds and the player with the most Influence Points at the end is the winner.

The active player will roll 3 dice during his turn and use the pip of the rolled yellow dice to claim a junction during the round.  The pip shown on each dice will determine where the Queen, the Bishop and the Knight will be positioned during the round.  The player with a claimed district adjacent to these characters will gain influence over them.  The influence gained can either be stored till the end of the game or spent to unlock more influence multiplier that will contribution significantly to scoring at the end of the game.

The player with the highest influence points at the end of the game wins the game.

Why should you play Queen’s Landing

This is probably one of the few, if not the only, roll-and-write that has successfully infused an element of area control into its game play.   The innovation has successfully merged the convenience of roll-and-writes with the immersive player interactions in conflicts that one would associate with area controlling or territorial gameplays.  If you are into any of the big releases from CMON, this watered-down and portable filler might just be the perfect game to serve as a warm-up for your epic 3-hour battles.

The decision making in this roll-and-write is also surprisingly deep for a game that lasts only 30 minutes.  On one hand, players will need to decide which junctions to claim to maximize his/her chance of gaining more influence over the three characters.  This is quite similar to the importance of placement in “Catan” whereby the more centrally placed you are in the distribution curve, the higher probability of you landing the dice roll that you need.  On the other hand, players will also need to make calculated moves on which junction to claim with the big rolls in order to lay a stake in claiming the entire district.

In addition to the game plays, Milan has masterfully brought us into the world of Queen’s Landing with his excellent graphic designs.  The map is riddled with details and the player sheets have been made more intuitive with the exceptional graphics and iconography. The world that Milan has created also served as an inspiration for Milan to create a standalone deduction game called “Usurpers”.

Enjoy 33% discount for Queen’s Landing from now till 3 Jul! 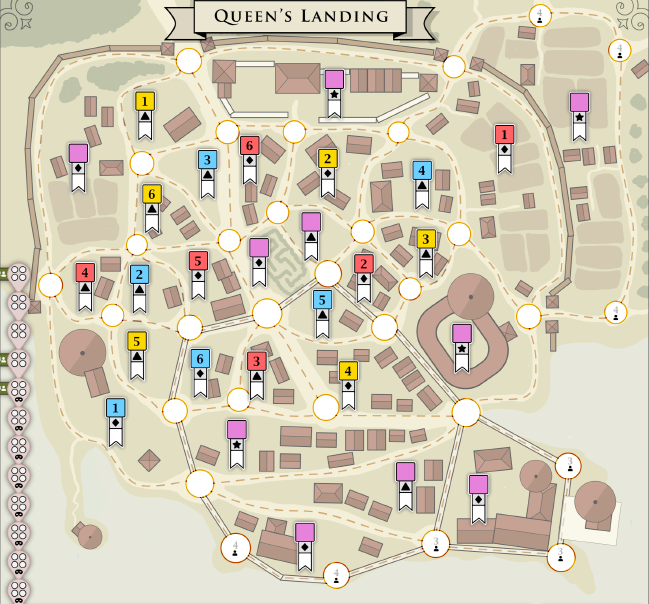 Link to the previous post of Print-and-Play Spotlight can be found here.