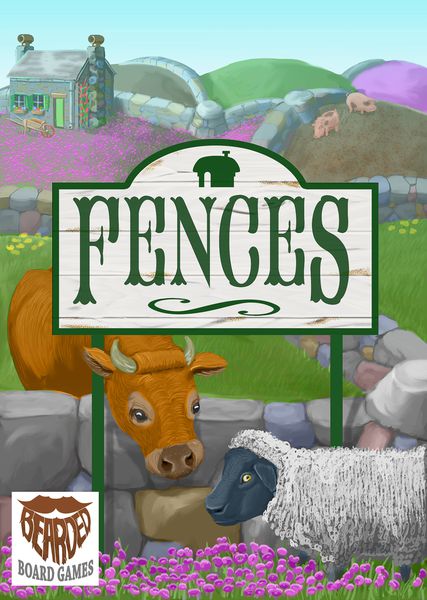 Fences is a tile-laying game in which you are a farmer trying to build pens for your animals.

On each turn, a player plays one of the two tiles that they have. After placing, the player can decide whether to claim an unclaimed field. If a field has been closed, it is scored accordingly. To end the player’s turn, a new tile is drawn. There are fields for cows, meadows for sheep, and mud holes for pigs. You are trying to collect as many animals as you can. Every animal you enclose is worth points, and double points if you FENCE in only one type of animal in the pen. You can also throw other animals into your opponents’ perfect fields to keep them from the bonus. Careful, you can only afford to maintain a limited number of fields. The game ends after the last tile is placed. The farmer with the most points wins!

Why you should play Fences

Despite having a similar feel to Carcassonne, it essentially feels unique with the variable player power being incorporated into its gameplay.  There are enough variations generated with each character in play such that it significantly increases the replay value of the game.

The game-play in Fences is also very much streamlined (consisting of only fences and animals) to a point whereby it is very easy to explain the rules (5 minutes maximum) and introduce to new gamers.  Even though the game play is streamlined, it does not mean the game lacks depth by any means.  There are several interesting decisions to be made when playing Fences.  One of the most interesting decision, in my opinion, happens when a player can decide to completely fenced up a field that an opponent has been heavily vested in (with his/her henhouse placed in the field).  The completion of the fencing of a field not only scores points for a player based on the character’s player power but also scores points for a player with a henhouse played in the fields.  Therefore, this presents players with a calculated decision whether to close off a fence to score points for himself/herself while taking into consideration the points that he/she will score for his/her opponents.

If you like to add a tile laying game in your collection, Fences proves to be game that is quick to play and easy to teach while providing enough depth for interesting decisions to be made.

Link to the previous entry on “Print-and-Play Spotlight” can be found here: https://randomskill.games/print-and-play-spotlight-escape-from-king-tut/