Constellations is a cosmology-themed roll-and-write in which players use dice rolls to create constellations.  Players are awarded points or special power-ups when constellations are completed.

The game takes place in 2 simple phases: roll and cross out.  A player rolls all the dice and the resulting pips from the dice will be used by all players to cross out stars on their respective player sheet.  The pips from the dice can be summed up to cross out any star on the sheet.  There are certain criteria to fulfill when crossing out some stars on the sheet, such as colour and number (same numbers) restrictions.  After all the stars in a constellation are crossed out, players are rewarded with points or power-ups depicted at the end of the constellation.  Once a power-up is activated, the corner of the sheet is folded and the access to paths and stars that are not previously available before are now available.

Why should you play Constellations

The game play is simple and, at the same time, challenging.  The decision making in this roll-and-write is immense since there are a variety of stars for a player to cross out if the right conditions are met.  At any point, there could be as many as 18 stars available for a player to cross out.  In addition, there are tough decisions to be made on whether to pursue paths with point rewards, power-up rewards or a mixture of both.

The innovation involved in creating a mechanism that folds the corners to unveil bonus paths and stars is truly unique and innovative.  This adds to the complexity of the game play and provides another layer to the decision making since the folding action covers up some of the paths and stars on the sheet.  A lack of planning will result in a waste of a player’s action if the previously crossed-out stars are eventually covered up by the folding action.  Therefore, careful planning in the cross-out phase is paramount in increasing efficiency and ensuring victory.

The excellent art and graphics design provided by Milan successfully transports players to a cosmological world filled with stars.  This provides a platform which successfully merges the theme to the game play and allow players to immerse themselves in the world of Constellations.

All in all, this is one of the better pen and paper games for groups that you can find in the market.  The best thing is.. it can theoretically accomodate an infinite number of players, if you can find that many people! 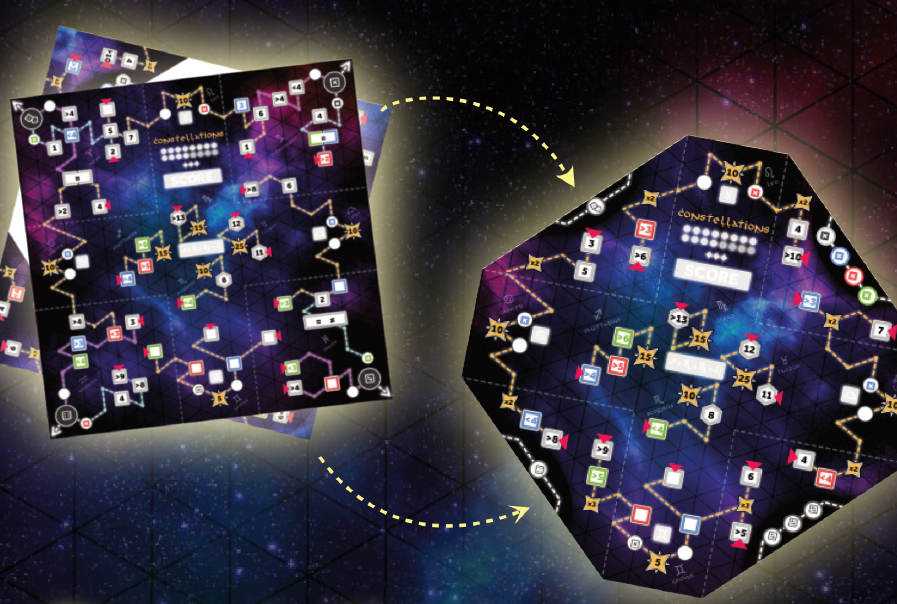 Link to the previous entry on the “Print-and-Play Spotlight” series -> https://randomskill.games/print-and-play-spotlight-birdsong/