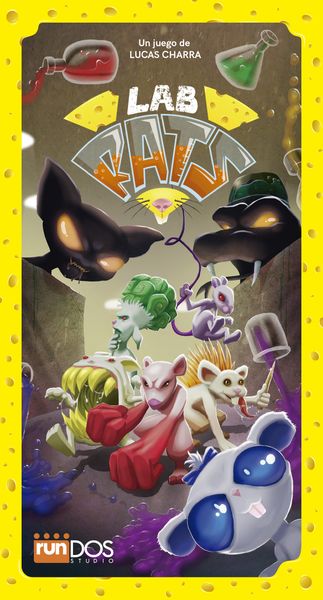 Lab Rats is a push your luck party game where the player take the role of a lab rat and must escape from a collapsing laboratory. The goal of the game is to collect four cheese tokens.

At the start of every round the players receive door cards(to create the laboratory) and potion cards (to pass obstacles).
In each round the player must open doors and face what lies behind them. The doors are represented by face down cards played by all the players in the middle of the table. Each of these cards contains an obstacle or event that must be resolved by the active player when the card is tapped.

Most of the obstacles are resolved by playing the potion card that matches the obstacle. When a player flip an obstacle card that he can’t resolve, the rat takes a wound. On a second wound the rat will die and by out of the round.