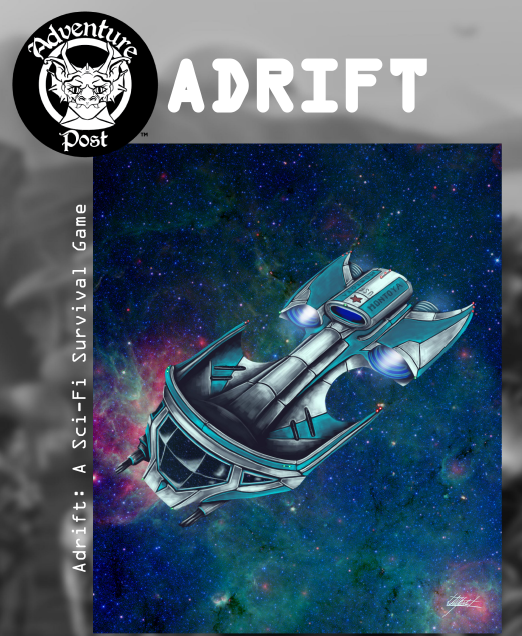 Adventure Post is a series of solo-mini-adventures delivered to your door on a postcard each week. Every week is a small portion of an overall larger campaign which will take many, many weeks to come to conclusion. The postcard will include a QR code or website address that will direct you to the weekly adventure document. The document will explain the setup, instructions, and key areas on the adventure map.

Adrift uses simplistic dice rolls for combat and interacting with the world. You play a the crew of the USF Montoya as they battle to keep their ship operational and sleeping passengers safe from harm.

The Story:
The USF “Montoya” has a skeleton crew in operation, while the colony of “Unnamed” remain in cryo-stasis, Shortly after a burn
manoeuvre the “Montoya” had a major impact, the cause is likely to be a derelict or rogue asteroid.
Alarms have sounded and the command crew have woken all available crew to restore vital functions. The ships log recorded by the Computer “TREVOR” recorded the above. TREVOR has suggested to you the Captain:
1: Engineering to survey hull for breaches.
2: Restore the main power.
3: Navigation to restore Subspace.
4: geometrics to find location.
5: Analyse Cryo-stasis systems and stabilise.
6: Security, a small squad of Federation Marines to secure the ship and repel borders if required.
7: Engineering to re-engage Hyperlight drive.

Adrift is only the first adventure in a larger overall campaign. There are more adventures of different themes and new rules on the horizon.